The random processes are fundamental in a plethora of engineering and science domains. They are used to model complex systems like weather forecasting, which are highly unpredictable.

In this blog post, we will introduce the simplest random process, i.e. the simple random walk, which is the basis and foundation for many random processes. We will simulate a random walk using the Python numerical libraries like NumPy. Moreover, we will make an animated visualization using the Matplotlib Animation API in order to emphasize the random nature of this phenomenon. This is an important part because we convey our message more easily. So let's begin and stay tuned!

We are not in control of everything and we can't predict all outcomes although we are used thinking that way. For example, how could we know the exact number of people in our favorite book store exactly at 12:36? We never know since this number is random and can't be calculated based on all observations we have. It is not possible to fit a magical deterministic formula to give us the answer. Instead, we can think of rough estimates and let the exact number of people be pure mere of luck. Thus, the number of visitors in the book store from minute to minute is a random process.

The random processes are used to model plenty of phenomena in the exact sciences and engineering. The best possible way to start thinking of them is to play a game with coin tossing. Every time we flip the coin if the outcome is head we win 1 dollar and of the outcome is tail we lose 1 dollar. Can we know how much dollars we would win or lose after 10 consecutive coin flips? Certainly no, but what we can know is how probable some outcome is after 10 steps. This leads us to the definition of a random walk.

Once we know the definition of a simple random walk, we can implement a simulation in Python and make a visualization of the possible outcomes.

By using the NumPy utilities we can easily simulate a simple random walk. Given the number of steps \( N \) as an input argument, we can randomly generate \( N \) samples from the set \( \{ +1, -1\} \) with an equal probability of \( 0.5 \). Then, we will only use the cumsum function, to give us the cumulative sum in every time step. The Python code is given below:

Matplotlib library provides an animation API that offers a different perspective of the plotting in Python. Instead of serving static charts, we can use an eye-catching animation to emphasize and more efficiently transfer the message we would like to send. This comes quite handy and the effect is furthermore amplified for time-series data such as the simple random walk

Using this animation API we can animate one realization of a simple random walk as shown in the code snippet below:

The full source code behind this random walk simulation and animation can be found in this GitHub repository. For more information, please follow me on Twitter.

In this short tutorial blog post, we simulated and animated a simple random walk using Python's Matplotlib library. This random process, although very simple is quite important and opens the way towards the other applied random processes.

This list includes but is not limited to the Brownian Motion and its variants like the Geometric Brownian Motion, used to model systems with random exponential growth. Moreover, it is a foundation for the Stochastic Differential Equations and Stochastic Integration. We will cover all of these topics in the next blog posts.

In this tutorial, we claimed that the normalized random walk follows a Gaussian distribution with mean 0 and variance 1, for which there is a strong mathematical proof. Although this is a universal truth, we can still make a numerical simulation, as shown in the code snippet below:


The resulting plot of this simulation is depicted in the image below: 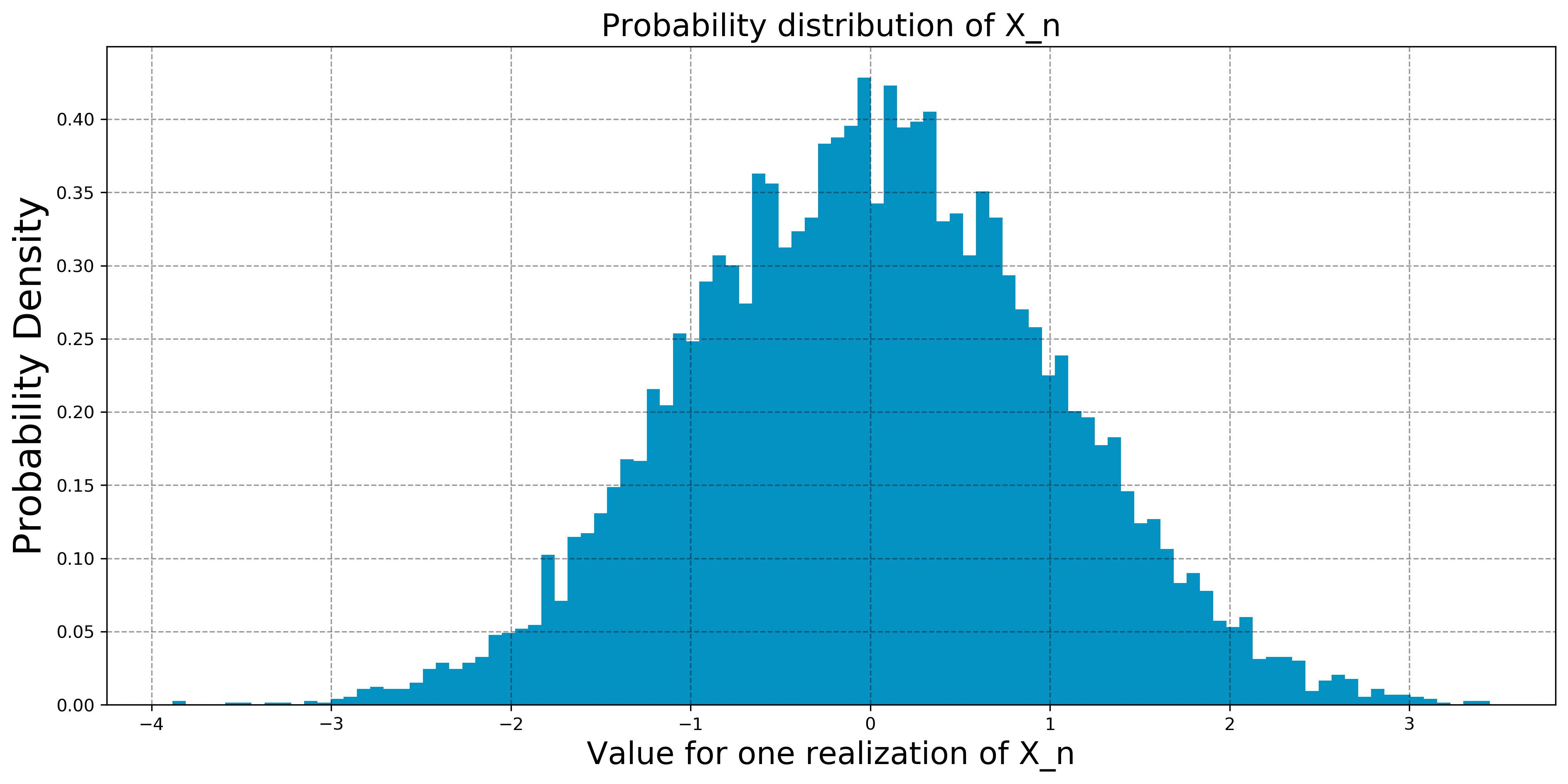