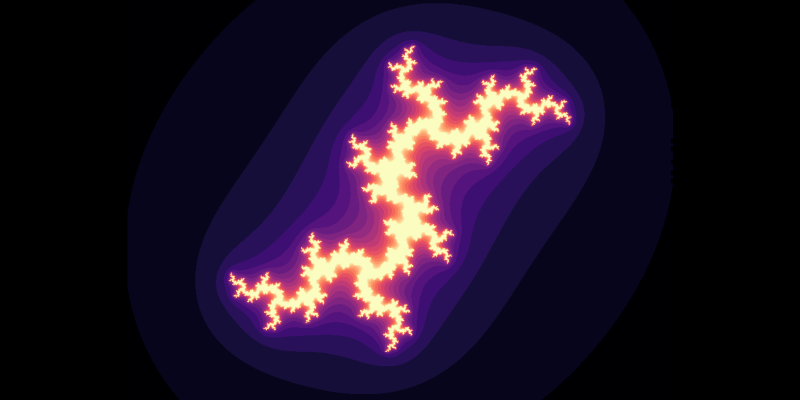 Disclaimer: This post was originally published on the Matplotlib’s Blog.

Imagine zooming an image over and over and never go out of finer details. It may sound bizarre but the mathematical concept of fractals opens the realm towards this intricating infinity. This strange geometry exhibits the same or similar patterns irrespectively of the scale. We can see one fractal example in the image above.

The fractals may seem difficult to understand due to their peculiarity, but that’s not the case. As Benoit Mandelbrot, one of the founding fathers of the fractal geometry said in his legendary TED Talk:

A surprising aspect is that the rules of this geometry are extremely short. You crank the formulas several times and at the end, you get things like this (pointing to a stunning plot)

In this tutorial blog post, we will see how to construct fractals in Python and animate them using the amazing Matplotlib’s Animation API. First, we will demonstrate the convergence of the Mandelbrot Set with an enticing animation. In the second part, we will analyze one interesting property of the Julia Set. Stay tuned!

We all have a common sense of the concept of similarity. We say two objects are similar to each other if they share some common patterns.

This notion is not only limited to a comparison of two different objects. We can also compare different parts of the same object. For instance, a leaf. We know very well that the left side matches exactly the right side, i.e. the leaf is symmetrical.

In mathematics, this phenomenon is known as self-similarity. It means a given object is similar (completely or to some extent) to some smaller part of itself. One remarkable example is the Koch Snowflake as shown in the image below: 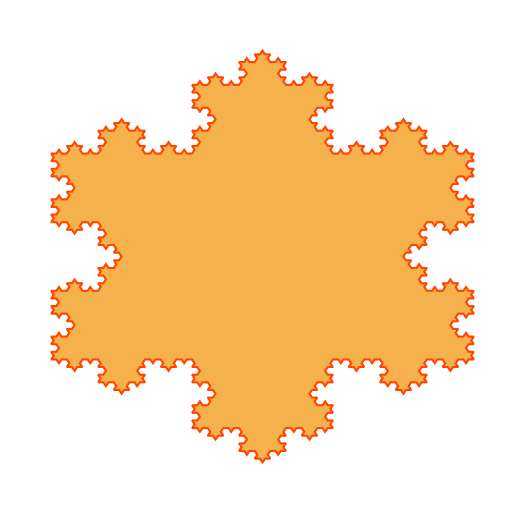 We can infinitely magnify some part of it and the same pattern will repeat over and over again. This is how fractal geometry is defined.

Mandelbrot Set is defined over the set of complex numbers. It consists of all complex numbers c, such that the sequence zᵢ₊ᵢ = zᵢ² + c, z₀ = 0 is bounded. It means, after a certain number of iterations the absolute value must not exceed a given limit. At first sight, it might seem odd and simple, but in fact, it has some mind-blowing properties.

The Python implementation is quite straightforward, as given in the code snippet below:

We can use the information about the number of iterations before the sequence diverges. All we have to do is to associate this number to a color relative to the maximum number of loops. Thus, for all complex numbers c in some lattice of the complex plane, we can make a nice animation of the convergence process as a function of the maximum allowed iterations.

One particular and interesting area is the 3x3 lattice starting at position -2 and -1.5 for the real and imaginary axis respectively. We can observe the process of convergence as the number of allowed iterations increases. This is easily achieved using the Matplotlib’s Animation API, as shown with the following code:

We make animations in Matplotlib using the FuncAnimation function from the Animation API. We need to specify the figure on which we draw a predefined number of consecutive frames. A predetermined interval expressed in milliseconds defines the delay between the frames.

In this context, the animate function plays a central role, where the input argument is the frame number, starting from 0. It means, in order to animate we always have to think in terms of frames. Hence, we use the frame number to calculate the variable threshold which is the maximum number of allowed iterations.

To represent our lattice we instantiate two arrays re and im: the former for the values on the real axis and the latter for the values on the imaginary axis. The number of elements in these two arrays is defined by the variable density_per_unit which defines the number of samples per unit step. The higher it is, the better quality we get, but at a cost of heavier computation.

Now, depending on the current threshold, for every complex number c in our lattice, we calculate the number of iterations before the sequence zᵢ₊ᵢ = zᵢ² + c, z₀ = 0 diverges. We save them in an initially empty matrix called X. In the end, we interpolate the values in X and assign them a color drawn from a prearranged colormap.

After cranking the animate function multiple times we get a stunning animation as depicted below:

The Julia Set is quite similar to the Mandelbrot Set. Instead of setting z₀ = 0 and testing whether for some complex number c = x + i*y the sequence zᵢ₊ᵢ = zᵢ² + c is bounded, we switch the roles a bit. We fix the value for c, we set an arbitrary initial condition z₀ = x + i*y, and we observe the convergence of the sequence. The Python implementation is given below:

Obviously, the setup is quite similar as the Mandelbrot Set implementation. The maximum number of iterations is denoted as threshold. If the magnitude of the sequence is never greater than 4, the number z₀ belongs to the Julia Set and vice-versa.

The number c is giving us the freedom to analyze its impact on the convergence of the sequence, given that the number of maximum iterations is fixed. One interesting range of values for c is for c = r cos α + i × r sin α such that r=0.7885 and α ∈ [0, 2π].

The best possible way to make this analysis is to create an animated visualization as the number c changes. This ameliorates our visual perception and understanding of such abstract phenomena in a captivating manner. To do so, we use the Matplotlib’s Animation API, as demonstrated in the code below:

The logic in the animate function is very similar to the previous example. We update the number c as a function of the frame number. Based on that we estimate the convergence of all complex numbers in the defined lattice, given the fixed threshold of allowed iterations. Same as before, we save the results in an initially empty matrix X and associate them to a color relative to the maximum number of iterations. The resulting animation is illustrated below:

The fractals are really mind-gobbling structures as we saw during this blog. First, we gave a general intuition of the fractal geometry. Then, we observed two types of fractals: the Mandelbrot and Julia sets. We implemented them in Python and made interesting animated visualizations of their properties.

If you liked this tutorial feel free to share it on the social media. Also it would be helpful if you subscribe to the mailing list below. You will get updates from time to time.