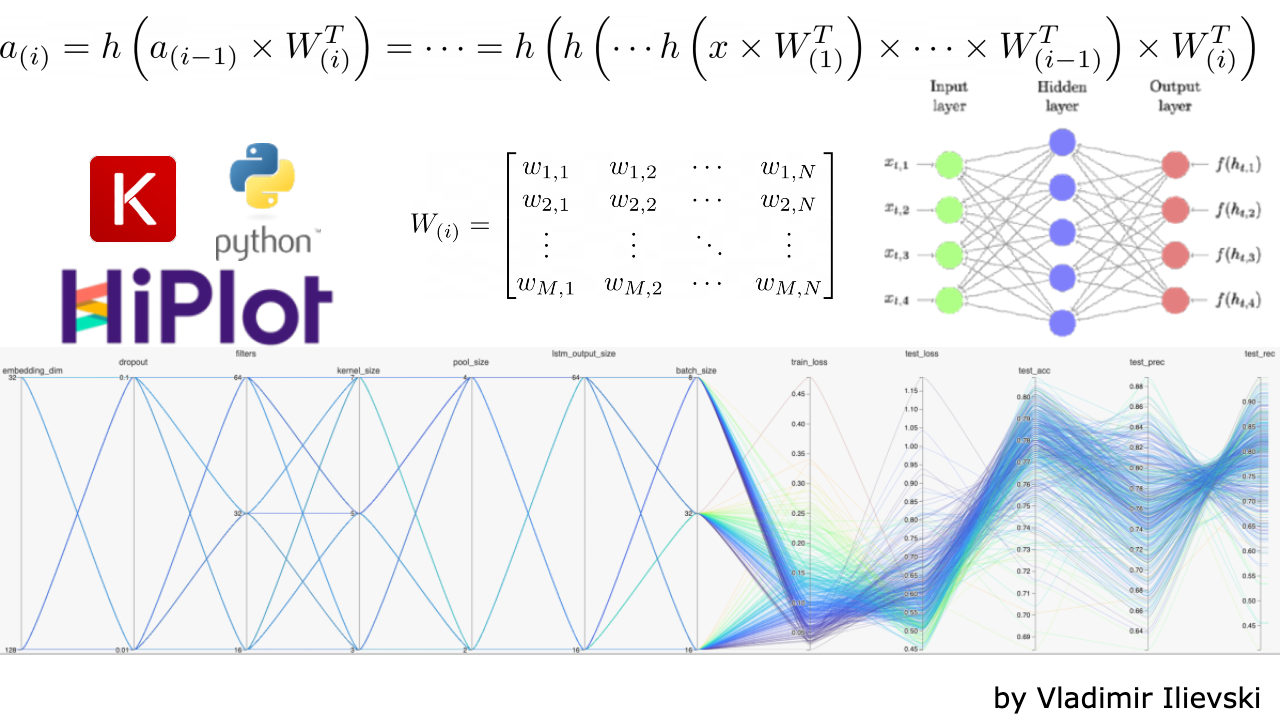 In Machine Learning (ML) out-of-the-shelf models are not always available. In many instances, we need to train a model on a specific task. But as in every optimization problem, "there ain't no such thing as a free lunch". Thus, we have to find the model that performs well on our task.

In this blog we will see how to easily keep track of the model's performance depending on the hyperparameter values in a visualized way. First, we will build a simple neural network using Keras. We will train this network on a sentiment analysis task for many combinations of the hyperparameters.

Finally, we will see how to use the HiPlot library to build an interactive visualization and search for optimal values. Stay tuned!

For demonstration purposes, we build a simple model in Keras trained on the IMDB Sentiment Analysis Dataset.

The Keras Dataset module provides a few preprocessed and vectorized datasets ready to use. The IMDB Sentiment Analysis Dataset contains already processed and tokenized sentences (each word has a unique ID) coupled with a label, either 1 indicating a positive sentiment or 0 for negative sentiment. To load it, we use the following Python code:

The machine learning model we build is a typical Neural Network architecture used in many text classification tasks. It includes the following layers:

The following Python snippet demonstrates what we just described above:

To measure the impact of the hyperparameters we must define a set of performance metrics. By default, we track the training and validation loss, which in this case is the binary cross-entropy. On top of this, we will trace the accuracy, precision, and recall. In general, it is useful to benchmark the model on multiple metrics. Depending on the use case we might prioritize one over another and at the same time observe the dependency between them.


Once we have defined the hyperparameters to track coupled with the performance metrics, we can start the hyperparameter search by plugging-in various combinations of values. In this sense, we create a hypergrid from the hyperparameter values. For each point on this hypergrid, we train and evaluate the model. We can think of this as one experiment, which is usually the case.

As we run the experiments, we log the model performance as a function of the hyperparameter values as one row in some external database or file. This is illustrated with the following snippet:


Now that we have generated metadata for our experiments, we have to make it actionable.

Data in raw format is difficult, sometimes impossible to interpret. This especially holds for multivariate data!

We can easily resolve this by using the parallel coordinates plot. With this type of plot, the data dimensions (a.k.a. features) are represented by parallel axes, one per dimension. Thus, each multivariate point is manifested as a poly-line connecting the corresponding dimensions. At the same time, this plot encodes the correlation between the data dimensions: line crossings indicate inverse correlation. One example of a parallel coordinates plot is shown below:

For seamless creation of interactive parallel coordinates plots, we can use HiPlot, an open-source Python library. Given the data that follows a consistent and predefined schema, it automatically generates parallel coordinates plot. The plot can be easily integrated into a Jypyter Notebook, as a standalone HTML file, or directly in a Streamlit app.

In our case, we have generated metadata for all experiments and we have to make it actionable. Ultimately, we want to see a summary of the hyperparameters' influence on the model performance and look at what suits our case.

By just running two lines of code such as:


we obtain this nice interactive plot as depicted below. Go on, give it a try and see how it works!


The benefit of using this interactive plot is that we have a clear overview of all experiments which can be additionally indexed with a unique ID.

In many practical situations, for model reproducibility reasons it is advisable to assign traceable IDs to the experiments, meaning we can always roll back and reproduce the same results. For example, if the model and the hyperparameter values are tracked with git, as an experiment ID we can use the SHA code of the commit encapsulating the latest repository modifications before running the experiment.

Obviously one disadvantage of this technique is the computational cost. Sometimes it is not affordable to run a plethora of experiments just to find the best hyperparameter values. However, over a longer time range, it is possible that the number of experiments will become significant. Therefore, in order not to lose any knowledge, it is still better to log the experiments and eventually visualize them with HiPlot.

In this blog we learned how to make our machine learning experiments more useful with a visualization technique called parallel coordinates plot.

We tracked and logged the performance of one simple Keras model depending on the hyperparameter values. Later we made this metadata actionable using HiPlot, an open-source Python library for creating interactive parallel coordinates plots.