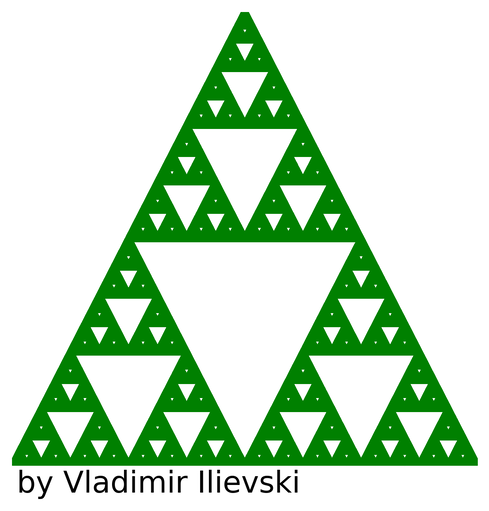 The Sierpiński Triangle as a Christmass Tree

In this short post, we will see how to create such a fractal in Python. Then, we will create an animated visualization using the Matplotlib Animation API.

How to create the triangle?

There are multiple ways to generate the triangle as summarized in the Wikipedia article for the Sierpiński triangle. One of the most popular methods is the one based on Chaos Game. Here is how it works in short.

Here is an implementation in Python:


Next, we'll see how to make an animation.

Making an animation: triangle within a triangle

To demonstrate the fractal nature of the triangle we will make an animation by zooming in on one part of the original triangle. For this purpose, we use the Matplotlib Animation API.

It is quite straightforward to make such an animation. In each iteration, we draw all the points, but we only reduce the x- and y-axis limits as a function of the iteration number. This creates a zooming effect. The Python implementation is given below:


The resulting animation is shown below. As we can see the same structure appears again and again. Because this is a simulation, the number of points is finite, so the pattern will stop appearing at some point. If we were able to generate an infinite number of points, the pattern would never disappear.

In one of the previous blog posts, we covered cellular automata. It is also possible to see the pattern from the Sierpinski triangle, by running the Rule 90 as depicted below: